Introduction to Climate Change
This unit introduces the mechanisms responsible for the heating of the Earth due to an increase in CO2 in the atmosphere. It reviews heat exchange in the Earth system and greenhouse forcing due to the presence of certain gases in the atmosphere.

More information about heat exchange in the Earth System is available in the unit on Heating the Earth's Atmosphere.

HTML Click to view the presentation in html (coming soon)

Sacramento and Climate Change: Evidence for Warming? This activity examines temperature data for the city of Sacramento over the last century to investigate whether there is evidence for warming. Students work in teams to calculate the mean temperatures and compare results for different decades in a gallery walk. This is an excellent opportunity for students to work with a large dataset since many instructional opportunities in Earth Science focus on modeling as a science and engineering practice. 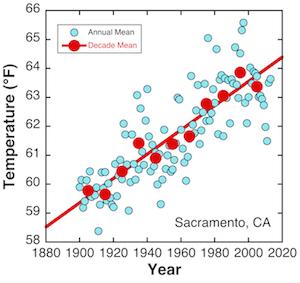 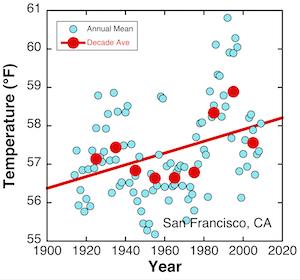 Global Warming in a Jar. PDF Word Document In this activity, students model the effect of CO2 on the heating of the Earth's atmosphere. One jar contains ambient air and represents the Earth's current atmosphere. The other jar contains air with added CO2 and represents the Earth's atmosphere where the CO2-content of the atmosphere is greatly increased. Although this activity may be run in small groups, it often results in discordant and nonreproducible data since the success of the experiment is dependent on ensuring that both jars receive the same amount of light. A more successful approach is to run this activity as a whole class activity or demonstration that is controlled by the teacher.

National Oceanograpic and Atmospheric Administration (NOAA) http://www.noaa.gov/ This federal agency is focused on the conditions of the atmosphere and oceans. NOAA conducts reseearch and provides data on oceans, weather, climate, fisheries, and aviation.

Unisys Weather http://weather.unisys.com/ This site provides graphical weather information. Much of it is highly technical, but the archive contains great information on hurricanes and satellite imagery.

Wind History http://windhistory.com The Wind History site has historic wind data for the locations around the world (most are in North America). It includes an interactive map with animations of wind roses for many locations.

Kindergarten
ESS3.C: Human Impacts on Earth Systems Things that people do to live comfortably can affect the world around them. But they can make choices that reduce their impacts on the land, water, air, and other living things. (K-ESS3-3)

Grade 4
ESS3.A: Natural Resources Energy and fuels that humans use are derived from natural sources, and their use affects the environment in multiple ways. Some resources are renewable over time, and others are not. (4-ESS3-1)

Grade 5
ESS3.C: Human Impacts on Earth Systems Human activities in agriculture, industry, and everyday life have had major effects on the land, vegetation, streams, ocean, air, and even outer space. But individuals and communities are doing things to help protect Earth's resources and environments. (5-ESS3-1)

Middle School
ESS3.D: Global Climate Change Human activities, such as the release of greenhouse gases from burning fossil fuels, are major factors in the current rise in Earth's mean surface temperature (global warming). Reducing the level of climate change and reducing human vulnerability to whatever climate changes do occur depend on the understanding of climate science, engineering capabilities, and other kinds of knowledge, such as understanding of human behavior and on applying that knowledge wisely in decisions and activities. (MS-ESS3-5)

High School
ESS2.D: Weather and Climate
The foundation for Earth's global climate systems is the electromagnetic radiation from the sun, as well as its reflection, absorption, storage, and redistribution among the atmosphere, ocean, and land systems, and this energy's re-radiation into space. (HS-ESS2-2), (HS-ESS2-4)
Gradual atmospheric changes were due to plants and other organisms that captured carbon dioxide and released oxygen. (HS-ESS2-6), (HS-ESS2-7)
Changes in the atmosphere due to human activity have increased carbon dioxide concentrations and thus affect climate. (HS-ESS2-4), (HS-ESS2-6)

ESS2.D: Weather and Climate Current models predict that, although future regional climate changes will be complex and varied, average global temperatures will continue to rise. The outcomes predicted by global climate models strongly depend on the amounts of human-generated greenhouse gases added to the atmosphere each year and by the ways in which these gases are absorbed by the ocean and biosphere. (secondary to HS-ESS3-6)

ESS3.D: Global Climate Change
Though the magnitudes of human impacts are greater than they have ever been, so too are human abilities to model, predict, and manage current and future impacts. (HS-ESS3-5)
Through computer simulations and other studies, important discoveries are still being made about how the ocean, the atmosphere, and the biosphere interact and are modified in response to human activities. (HS-ESS3-6)

The greenhouse warming of our planet is only due to human activities.

Human-induced climate change is a controversial theory among scientists.

The ozone hole is directly related to global warming.

☺ Like this page? Want something different? Tell me what you think jeff.seitz@csueastbay.edu